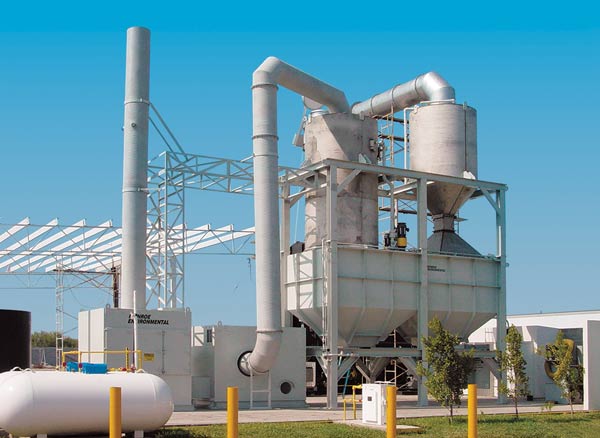 Monroe Environmental was called upon to purify a 20,000 CFM exhaust stream that was being discharged from an industrial waste incinerator at 2,000°F. The pollutants that needed to be removed were:

The combination of soluble and solid pollutants, coupled with the extremely high exhaust temperature, made this a challenging situation that would require several stages — quench, venturi scrubber, clarifier, packed tower scrubber, and carbon adsorption.

In order to properly remove the toxic pollutants from the exhaust stream, Monroe first designed and built a rapid water quench to cool the water to 170°F. This prevented the re-formation of dioxins from the incinerator process during the subsequent scrubbing stages.

The next stage of the system was a Monroe Adjustable Venturi Wet Scrubber to remove the particulate from the air stream. The particulate settled to the bottom of the clarification tank where it could then be discharged and removed for proper disposal.

The final phase of the system consisted of a Monroe Carbon Adsorber to remove any trace mercury (Hg) that was left in the exhaust stream. The purified air stream was then exhausted into the environment. A Monroe engineer was on-site during installation and start-up to provide assistance, product training, and technical support.

Independent lab testing confirmed that the purified air stream met all government discharge regulations. Because the entire system had been assembled and pre-fit in the Monroe shop prior to shipment, the equipment installed quickly and was ready for use as soon as on-site assembly was completed despite its size and complex, multi-stage design.