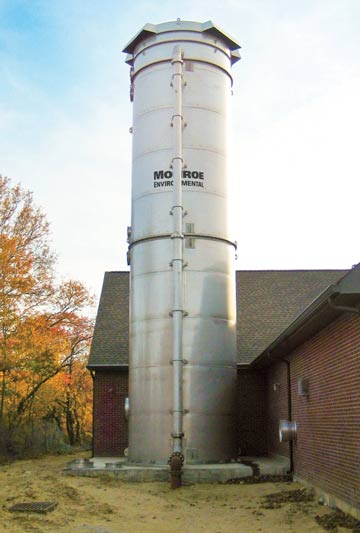 The groundwater source for a municipal water treatment plant was contaminated with a variety of VOCs (Volatile Organic Compounds) including TCE, PCE, DCE, and vinyl chloride. In order to complete the treatment process, the VOCs had to be removed from the water before it could be filtered, polished, and distributed to the community for safe drinking.

The plant was located in a suburban neighborhood, so the noise level from the stripping tower had to be minimized so as to not disturb the surrounding residents. Previous Air Strippers (from another manufacturer) had become a nuisance to the community and this had to be avoided with the new units.

Monroe Environmental designed and built a custom Air Stripper which would be capable of removing 99.97% of the influent contaminants, predominantly TCE (from 3,800 ug/L down to 1 ug/L). The Air Stripper was constructed of 304L stainless steel and measured 13 ft. in diameter and 50 ft. in height.

In order to minimize the noise during operation, Monroe engineered a unique air discharge arrangement that reduced the noise associated with the air exiting the tower.

The Stripping Tower was installed and met the required efficiency of 99.97% removal of the VOCs. The plant was so happy with the reduced noise levels that they came back to Monroe to explore the possibility of retrofitting the competitive (non-Monroe) units at the plant in order to make them as quiet as the Monroe Air Stripper.