My Oil/Water Separator (or CPI Separator) is Constantly Clogging!

Most plants don’t separate solids from oils before an oil/water or CPI Separator. If you send solids into an OWS that isn’t capable of handling solids…you will get clogged media and low flow.

HELP! My Oil/Water Separator (or CPI Separator) is Constantly Clogging!

We get calls ALL THE TIME about poor operation in existing CPI–Oil/Water Separators (OWS). The issues described follow a similar pattern:

…which means lots of downtime for cleaning/maintenance…

…which is expensive and time consuming….

…or we spend lots of money on replacement media rather than doing all of that frustrating maintenance.”

These common OWS issues are the result of some market trends that have developed over the years:

Luckily, Monroe Environmental has a separator media that solves these problems and can easily be retrofit into many OWS/CPI Separator tanks – the Monroe X-Flo Separator Plate Pack. Monroe has been using this technology successfully for over 40 years for oil water separation and solids removal. It provides exceptional oil separation but also easily sheds solids due to larger spacing between separator plates.

The Monroe X-Flo Separator Plate Pack can be constructed from corrosion resistant thermoplastics such as UHMW and Polypropylene, or stainless steel and high-grade metal alloys. 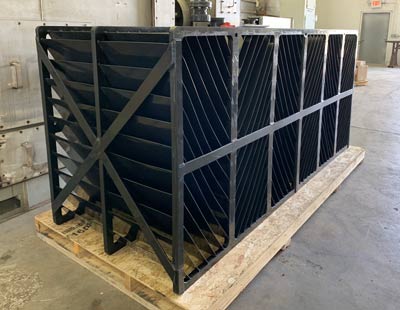 If you are having issues with your Oil/Water Separator, know that there is help. Give Monroe a call and we can discuss retrofitting your tanks with our superior media, or pilot testing to prove out our technology before full scale commitment.

Stay informed about air pollution control and water/wastewater treatment applications and solutions from Monroe Environmental. Subscribe to our newsletter.